The only X-Files reboot idea that matters

The internet broke into pieces with the news that Fox is bringing you back everyone's favorite 90's supernatural conspiracy show, The X-Files, for a six-episode revival. Today's genre fans owe so much to The X-Files – the show was a shippers' paradise, blazing trails for online fan communities, and making strides to normalize fanfiction, fan art, and the fannish life.

Now, it's returning. But is a straight reboot of The X-Files really what fans want?

I love X-Files, but don't do this. RT @Newsweek: 'X-Files' reboot is in early conversations, according to execs http://t.co/lEbAI9OR3g

We're officially in Star Wars Episode I territory when it comes to legacy-maiming.

I don't want to believe in an X-Files reboot. http://t.co/Kng2s2IHgY

Many X-Philes are worried that the new show may not be up to par of those incredible early seasons and end up somewhere in the weeds with Season 9. Of course, X-Files fans are a rabid bunch – I know, I'm one of them – so even suggesting a reboot might not be in our best interests may be enough to get me abducted, but hear this out.

The thing that makes The X-Files so difficult to reboot was it was a product of its time. It evolved as modern technology evolved, Mulder and Scully upgrading their computers season by season, getting pagers, then eventually cell phones. But with technology comes a different kind of paranoia. It's hard to imagine the loner Max Fenig, who lived in a trailer with his recording equipment, in a 2015 reboot. Every piece of equipment Fenig kept in that trailer could fit on a standard iPhone today. And with HD video recording equipment in every civilian's back pocket, could we possibly believe that each week's monster of the week/flying saucer hasn't been caught on camera yet? Or will each episode become a "zoom in on that" analysis of locals' Instagram photos?

No. Like the truth, a better idea is out there. Meet Hipster Mulder/Punk Scully. 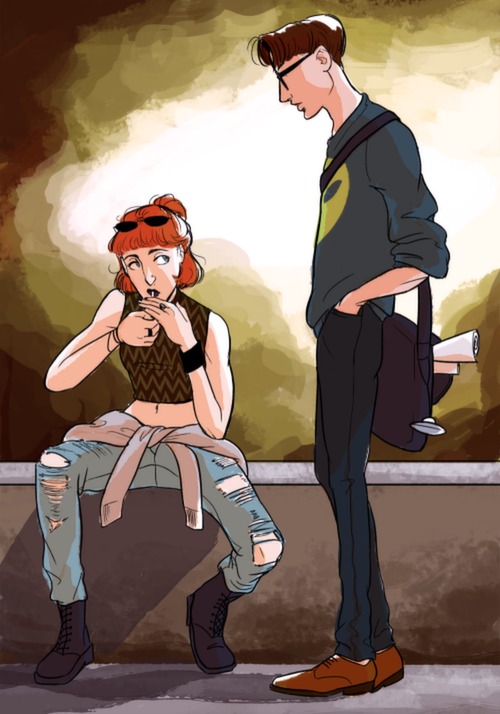 The college-era AU (alternate universe) started with a Tumblr textpost from punkscully wherein Mulder is studying psych and Scully is a young punk in med school, "her hair dye is called something like rocket red or radical red and it's RED RED with matching lipstick." 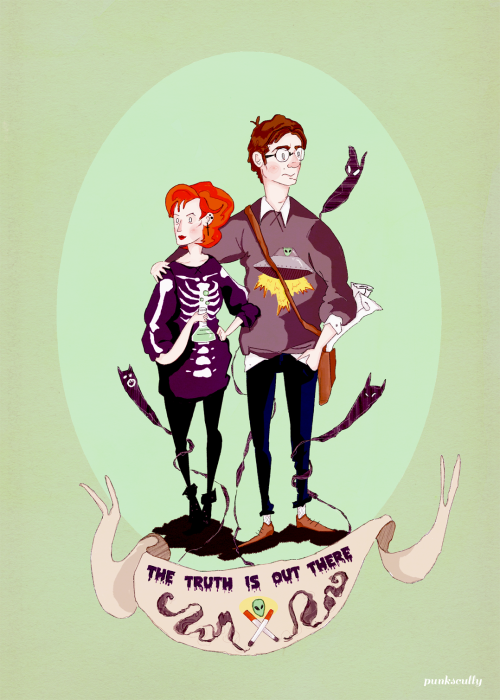 Together, the AU goes, hipster Mulder and punk Scully, "hunt aliens late at night and visit graveyards after class and break into the uni's lab to conduct experiments and use the equipment to verify results. mulder's minifridge in his room is literally ALWAYS filled with beer and sunflower seeds only and his ceiling has those little glow in the dark star stickers on it."

The idea was so appealing that dozens of other fan artists, fic writers, and playlist makers have sprung forward to join in the fun. 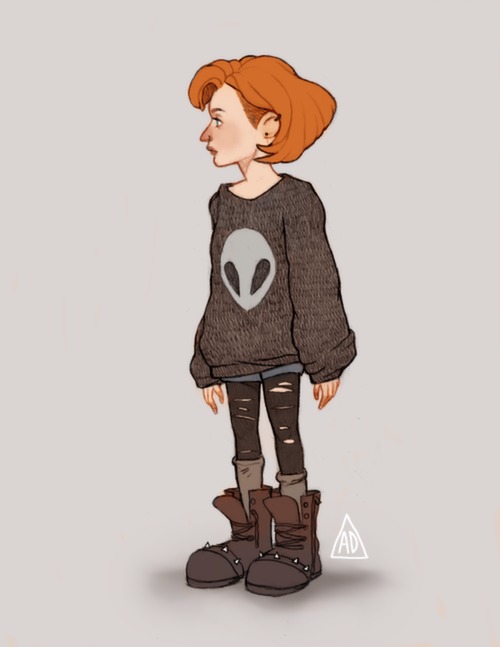 But how, you may be asking, could hipster Mulder and punk Scully be friends in college when they met for the first time in the FBI, years later.

To which I reply, have you ever seen The X-Files? The rules of time and space in this universe are, let's call it, flexible. There was an AU episode where all the characters except Mulder played alternate versions of themselves in 1941 on board the Queen Anne in the Bermuda Triangle. There was an episode where Mulder and Scully thought they were living their regular lives, but in fact they were trapped in a cave in a joint hallucination brought on by a giant psychedelic mushroom. They even set up the concept of missing time and memory loss right there in the pilot episode. So, shapeshifters, fangless vampires, or aliens, I'll leave the how up to Chris Carter, but I'll stand my ground that the what should be hipster Mulder and punk Scully. 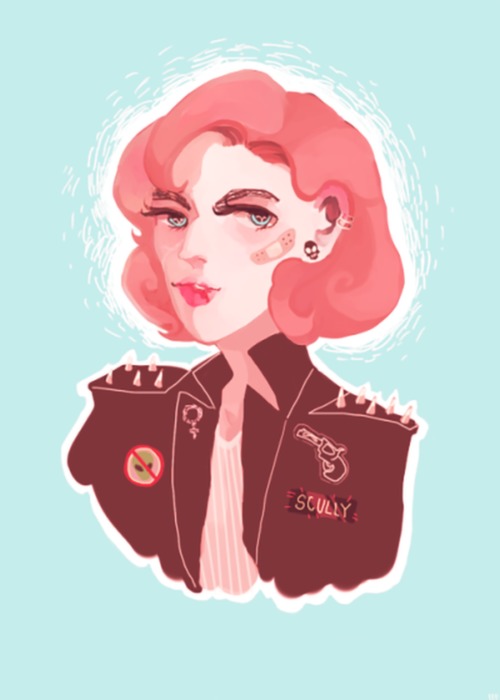 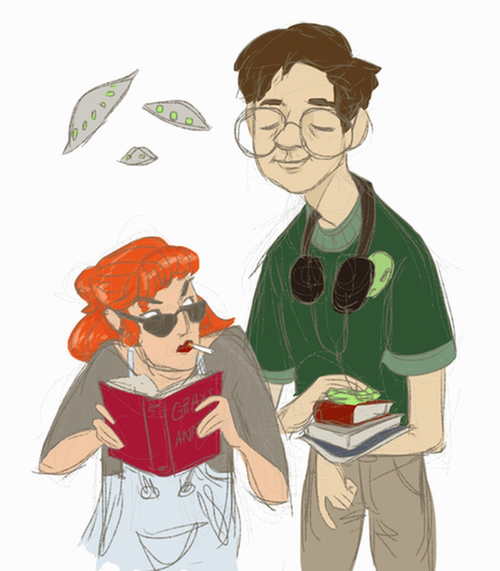 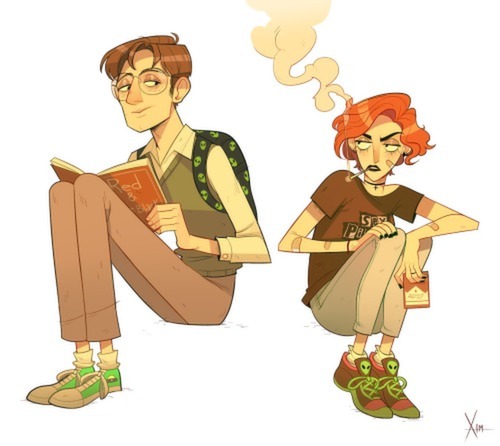 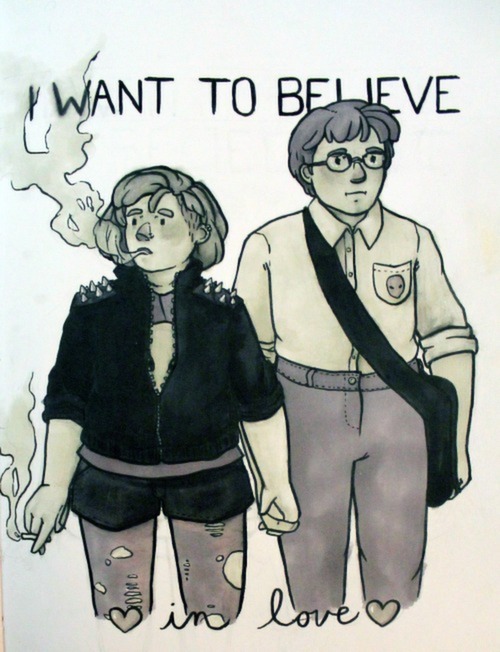 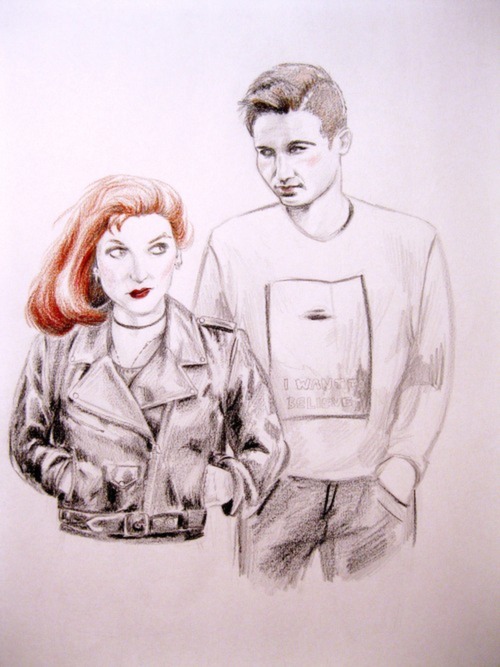 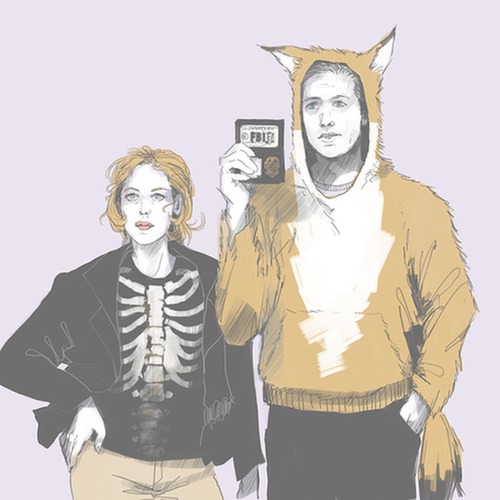 You guys there is so, so much more. Check out the Tumblr tag.